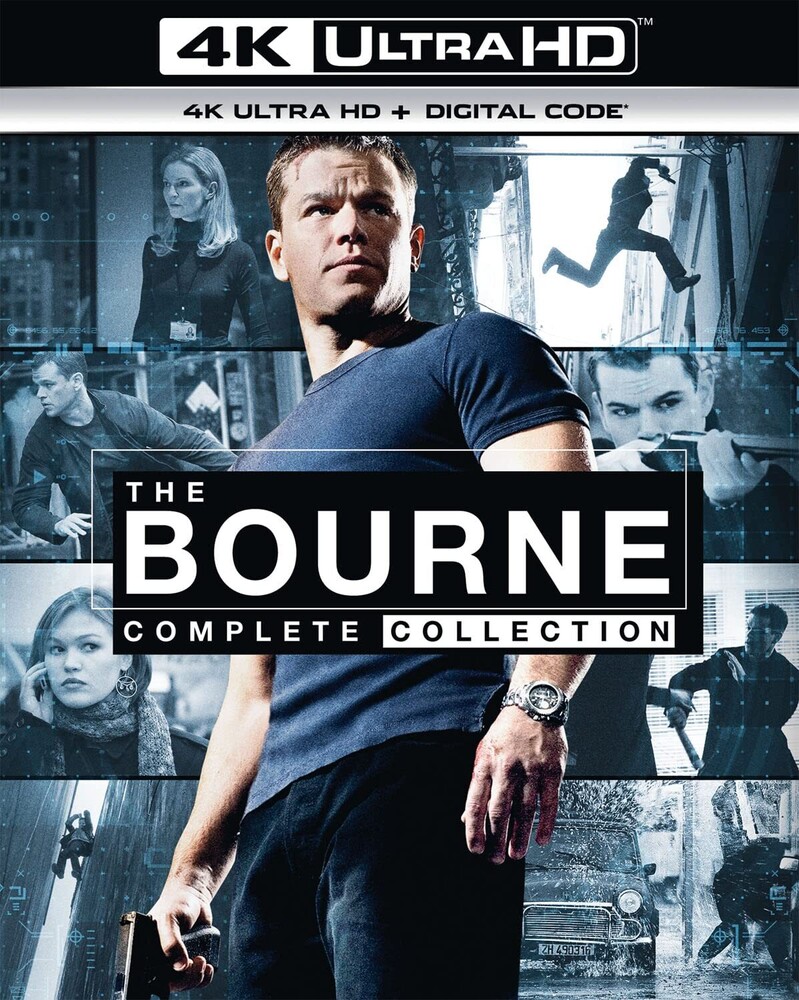 Six-disc set includes: The Bourne Identity (2002)In this riveting take on Robert Ludlum's expert suspenser, Matt Damon is an amnesiac trying to piece together his past while dodging assassins and CIA operatives across Europe. As he, with help from a German woman (Franka Potente) he meets, closes in on uncovering his true background, his own espionage abilities and killer instincts start to resurface. With Chris Cooper, Clive Owen, Julia Stiles, Brian Cox; directed by Doug Liman. Extended version; 119 min. C/Rtg: PG-13 The Bourne Supremacy (2004)Gripping adaptation of the second entry in Robert Ludlum's spy trilogy finds ex-CIA assassin Jason Bourne (Matt Damon) attempting to live a quiet life in a remote coastal town with his girlfriend (Franka Potente). But when his former employers decide to track him down, Bourne is forced out of retirement in order to save himself and protect the woman he loves. Brian Cox, Julia Stiles, Karl Urban, and Joan Allen also star. 109 min. C/Rtg: PG-13 The Bourne Ultimatum (2007)Matt Damon returns in the fast-paced third installment of actioners based on the Robert Ludlum novels. Targeted for elimination by the CIA's nefarious black ops division, Jason Bourne (Damon) must turn to former agency ally Nicolette (Julia Stiles) for help as he tries to stay alive long enough to find the final pieces of his shattered memory. Joan Allen, David Strathairn, Scott Glenn, and Albert Finney co-star; directed by Doug Liman. 116 min. C/Rtg: PG-13 The Bourne Legacy (2012)If you thought Jason Bourne was the only secret agent hunted by the very government that created him, think again. This action-packed sequel to the movies based on Robert Ludlum's series of spy novels follows Aaron Cross (Jeremy Renner), a black-ops specialist whose mental and physical abilities have been enhanced by advanced drugs. Targeted for termination, Cross teams with a scientist (Rachel Weisz) in an effort to evade his would-be assassins. Joan Allen, Edward Norton, David Strathairn co-star. 135 min. C/Rtg: PG-13 Jason Bourne (2016)After a nine-year-absence, Matt Damon reprises the role of former CIA assassin Jason Bourne in this thrilling chapter in the Robert Ludlum-inspired film series. When Bourne discovers there's still more to learn about his mysterious past, it sets him on a dangerous search for the truth about his father. Now, he'll have to use all of his deadly skills in order to stay one step ahead of another Company operative (Vincent Cassell) sent to finish him off once and for all. Julia Stiles, Alicia Vikander, and Tommy Lee Jones co-star. 123 min. C/Rtg: PG-13
All New Items on flyvintageandvinyl.com are Priced Below MSRP
and do not reflect our in-store prices and are not necessarily in stock at our physical store.
In fact, most items won’t be because we’re a small, family run business and don’t have space to stock nearly 500,000 new titles.