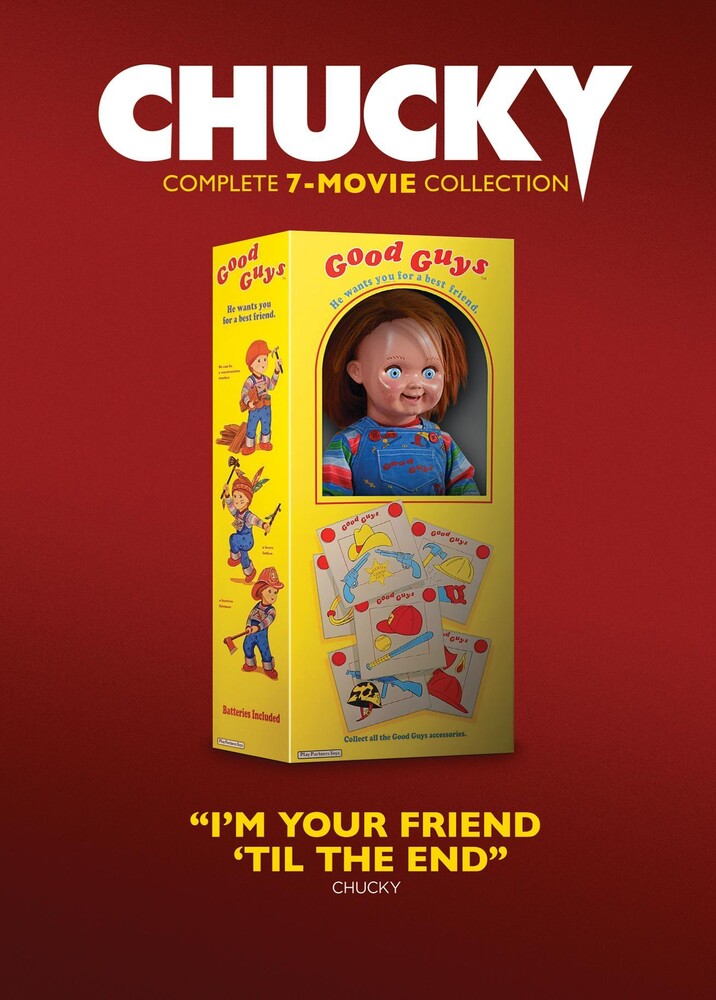 Seven-disc set includes: Child's Play (1988) Gunned down in a toy shop, a homicidal psychotic casts his soul into a pudgy "Good Guy" doll named Chucky, becoming a toy for 6-year-old Andy Barclay (Alex Vincent) and a terror to the rest of Chicago. Andy's mom (Catherine Hicks) and Detective Mike Norris (Chris Sarandon) are just two of Chucky's targets, in this doll-icious horror hit from director Tom Holland ("Fright Night"). With Dinah Manoff, Jack Colvin, and Brad Dourif as the voice of Chucky. 87 min. C/Rtg: R Child's Play 2 (1990) Diabolical doll Chucky is back... and ready to hack! Mom's in a mental institution following the harrowing ordeal of going head-to-head with the killer children's toy. Her son is taken in by foster parents, but nothing can keep Chucky from terrorizing him again. With Alex Vincent, Jenny Agutter, and the voice of Brad Dourif. 84 min. C/Rtg: R Child's Play 3 (1991) It's been eight years since Chucky was destroyed, but when toy manufacturers try to restart production of "Good Guy" dolls, the psychotic spirit enters a brand-new plastic shell and sets out to find a human body to possess. Chucky's scarifying antics at a military school are worth a 21-AAAHHH! Salute. Justin Whalin, Perrey Reeves, and Brad Dourif as Chucky's voice star. 90 min. C/Rtg: R Bride Of Chucky (1998) Thanks to some makeshift stitching and a voodoo spell from girlfriend Jennifer Tilly, demented doll Chucky is brought back to "life" in the fearsome fourth entry in the "Child's Play" series. But when Chucky's psychotic side emerges and Tilly is killed, there'll be two terrifying playthings looking for new human bodies to inhabit. With Katherine Heigl, Nick Stabile, John Ritter and Brad Dourif as the voice of Chucky. 89 min. C/Rtg: R Seed Of Chucky (2004) With the production of a movie based on the killer doll underway, the "real" Chucky and Tiffany (voiced by Brad Dourif and Jennifer Tilly) are resurrected by their androgynous offspring Glen/Glenda (voiced by Billy Boyd) and head off to Hollywood to try and get the film's star (Tilly as herself) to bear them another child. Redman, Jason Flemyng and John Waters co-star. Extended edition; 88 min. C/Rtg: NR Curse Of Chucky (2013) After a few entries that had more laughs than scares, the "Child's Play" series gets back to it's horror roots with this fright-packed sixth installment. The deadly doll (voiced by Brad Dourif) has returned and this time he's terrorizing two sisters in the wake of their mother's suicide. But has Chucky picked these unsuspecting folks at random or is he out to settle an old score? Fiona Dourif (Brad's real-life daughter), Danielle Bisutti, A Martinez star. R-rated version; 95 min./Unrated version; 97 min. C Cult Of Chucky (2017) Her entire family killed by Chucky (voiced by Brad Dourif), Nica (Fiona Dourif) has spent the last four years in a mental institution, convinced she was actually responsible for their deaths. And when she's given a "Good Guy" doll as part of her therapy, it coincides with a series of murders at the asylum. Now, Andy Barclay (Alex Vincent)-all grown up since his encounters with Chucky in the first two films-must help Nica battle the terrible toy. Jennifer Tilly co-stars in the seventh chapter in the hit horror series. R-rated version; 91 min./Unrated version; 90 min. C Widescreen (Enhanced); Soundtrack: English; Subtitles: English (SDH), Spanish; audio commentary; featurettes; documentaries; photo gallery; theatrical trailers; deleted scenes; gag reel; storyboards.
All New Items on flyvintageandvinyl.com are Priced Below MSRP
and do not reflect our in-store prices and are not necessarily in stock at our physical store.
In fact, most items won’t be because we’re a small, family run business and don’t have space to stock nearly 500,000 new titles.