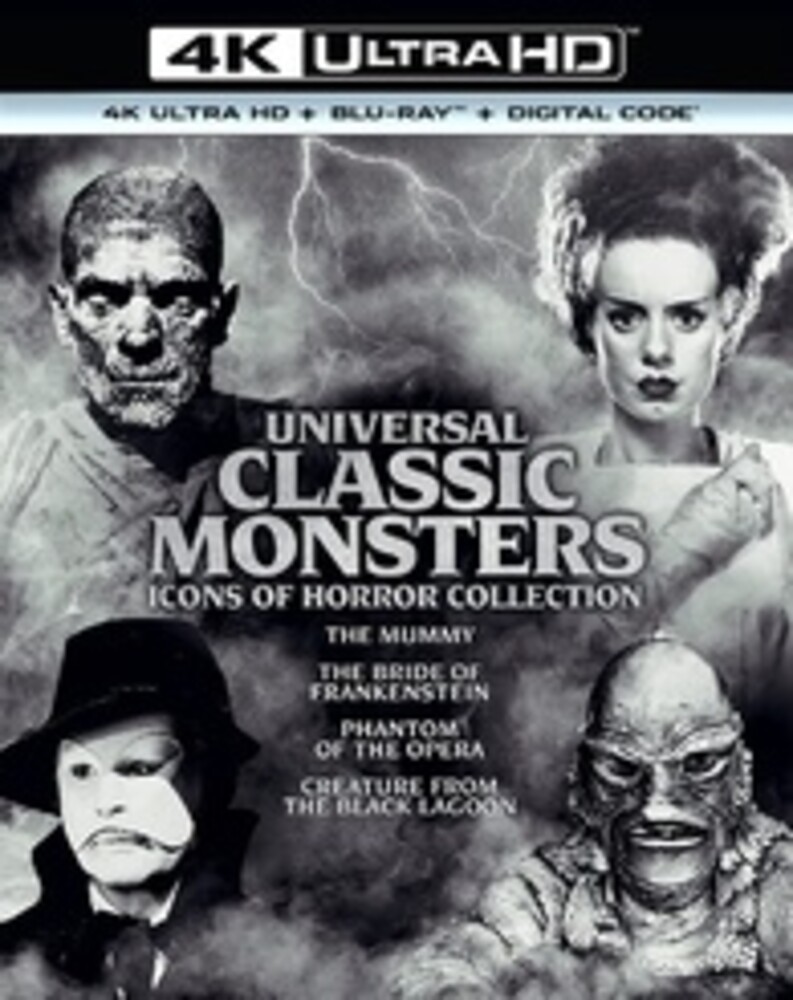 Eight-disc set includes: The Mummy (1932)One of the all-time classic chillers, with Boris Karloff playing the title role of 3,700-year-old Egyptian high priest I'm-Ho-Tep, condemned and buried alive for sacrilege by his people. Brought back to life when an archeological dig uncovers his tomb and a scroll that can revive the dead, Karloff attempts to reunite with the reincarnation of his lost love. Zita Johann, David Manners, Bramwell Fletcher co-star. 74 min. BW/Rtg: NR Bride Of Frankenstein (1935)Boris Karloff's back and Elsa Lanchester's got him in one of the greatest horror films ever made. Revealed to be very much alive, Dr. Frankenstein (Colin Clive) takes the next step in his quest to unlock the mysteries of immortality when he's convinced by mad scientist Dr. Pretorius (Ernest Thesiger) to construct a mate (Lanchester) for his brutish creation (Karloff). Valerie Hobson also stars; directed by James Whale. 75 min. BW/Rtg: NR Phantom Of The Opera (1943)Winner of two Academy Awards, this lavish Technicolor retelling of the horror classic stars Claude Rains as Enrique Claudin, a violinist whose face is scarred by acid during a dispute with a music publisher over a concerto he composed. From beneath the Paris Opera House, the disfigured Claudin becomes consumed by his obsession with Christine Dubois (Susanna Foster), a beautiful and gifted singer. Nelson Eddy, Hume Cronyn, Leo Carrillo also star. 93 min. C/Rtg: NR Creature From The Black Lagoon (1954)In this Universal horror classic that spawned two sequels, a team of scientists on an expedition down the Amazon to find a link between land and sea animals discovers more than it bargained for in the form of a water-breathing, half-human gillman... and soon the hunters become the hunted! Richard Carlson, Julia Adams, Richard Denning, Whit Bissell star; directed by Jack Arnold. Not in 3D. 80 min. BW/Rtg: G Soundtracks: English DTS HD mono Master Audio, French DTS mono; Subtitles: English (SDH), Spanish; audio commentary; featurettes; theatrical trailers; photo gallery.
All New Items on flyvintageandvinyl.com are Priced Below MSRP
and do not reflect our in-store prices and are not necessarily in stock at our physical store.
In fact, most items won’t be because we’re a small, family run business and don’t have space to stock nearly 500,000 new titles.