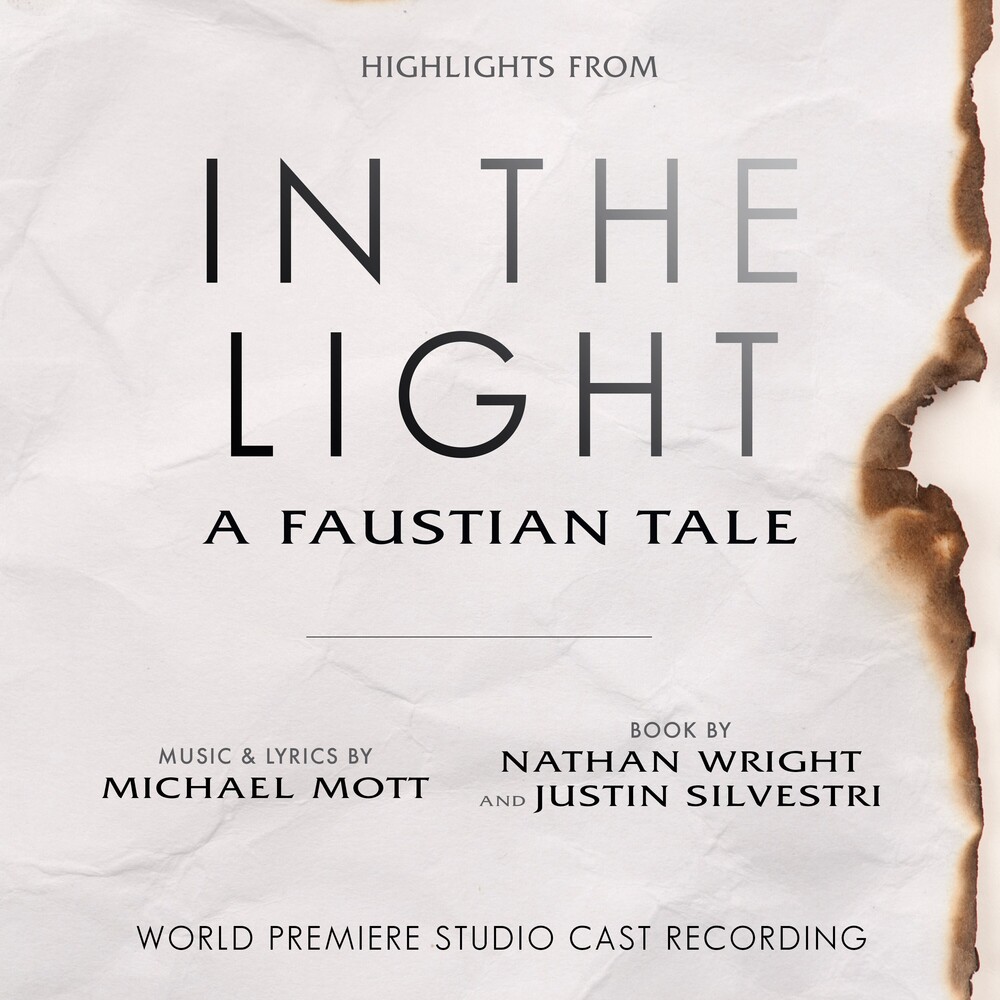 In The Light - A Faustian Tale (Highlights from the World Premiere
Format: CD
New: Available $17.08
Wish

IN THE LIGHT, A Faustian Tale - the new musical with a contemporary spin on the epic Faustus story of greed, power and lust - features music and lyrics by by Michael Mott (Where The Sky Ends), book by Nathan Wright (Architecting) and Justin Silvestri, orchestrations by Kim Scharnberg (Jekyll & Hyde), and arrangements by Mott and Joshua Zecher-Ross (Be More Chill). The world premiere recording stars Jeremy Jordan (Newsies, Bonnie and Clyde) as "Johann Faustus", Solea Pfeiffer (Hamilton) as "Gretchen Wagner", Ciara RenĂ©e (Frozen) as "Ana Faustus", Antonio Cipriano (Jagged Little Pill) as "Valentine Engel", Bobby Conte Thornton (Company, A Bronx Tale) as "The Traveler", Anne Fraser Thomas (Hercules) as "Hilda", Aisha Jackson (Frozen) as "Agnes", Zachary James (The Addams Family) as "Archbishop Peter". The recording's ensemble features Lynn Craig (Lazarus), Derrick Davis (Carousel), Cooper Grodin (Phantom of the Opera tour), Jason Pintar (Titanic tour), Lindsay Rider ("American Idol") and Karla Shook (Tin Pan Alley). In The Light follows Dr. Johann Faustus, an astronomer, who is accused of blasphemy by the Holy Inquisition. Guided by a mysterious being called the Traveler, he flees to the small town of Hertz. There he meets a young scholarly woman named Gretchen, who shares his goals. Gretchen believes Doctor Faustus can use the town to begin a rebellion against the Inquisition. Together, they create a plan to resist it's coming and to overthrow the power of the Church. As their plot proceeds, secrets Gretchen has hidden are discovered and Johann's ambition is undermined by his own tormented mind. The Traveler urges the two forward and their dysfunctions entangle, leading to disaster for all.
All New Items on flyvintageandvinyl.com are Priced Below MSRP
and do not reflect our in-store prices and are not necessarily in stock at our physical store.
In fact, most items won’t be because we’re a small, family run business and don’t have space to stock nearly 500,000 new titles.